Hanuman is the symbol of strength and energy. Hanuman is said to be able to assume any form at will, wield rocks, move mountains, dart through the air, seize the clouds and rival Garuda in swiftness of flight. He is worshipped as a deity with magical powers and the ability to conquer evil spirits.

Hanuman Jayanthi is celebrated to commemorate the birth ofHanuman, the Vanara god, widely venerated throughout India. The event is celebrated on the 15th day of the Shukla Paksha, during the month of Chaitra (the Chaitra Pournimaa).

Hanuman is one of the Chiranjivi. He is the son of Anjana and Kesari, and is also described as the son of the wind-god Pavan, who according to several stories, played a role in his birth.

On how he got his name as Hanuman:

One legend is that Indra , the king of the gods, struck Hanuman’s jaw during his childhood. The child received his name from the Sanskrit words Hanu (“jaw”) and -man (or -mant, “prominent” or “disfigured”). The name thus means “one with prominent or disfigured jaw”.

Another theory says the name derives from the Sanskrit words Han (“killed” or “destroyed”) and maana (pride); the name implies “one whose pride was destroyed.

Hanuman was born to the anjaneri mountain. His mother Anjana was an apsara who was born on earth due to a curse. She was redeemed from this curse on giving birth to a son. The Valmiki  Ramayana states that his father Kesari was the son of Rahu, he was the King of a place named Sumeru.  Anjana performed intense prayers lasting 12 long years to Shiva to get a child. Pleased with their devotion, Shiva granted them the boon they sought. Hanuman, in another interpretation, is the incarnation or reflection of Shiva himself.

Hanuman is often called the son of the deity Vayu (Wind God); several different traditions account for the Vayu’s role in Hanuman’s birth. One story mentioned in Eknath’s Bhavartha Ramayana (16th century CE) states that when Anjana was worshiping Shiva, the King Dashratha of Ayodhya was also performing the ritual of Putrakama Yagna in order to have children. As a result, he received some sacred pudding (Payasam) to be shared by his three wives, leading to the births of Rama, Lakshmana, Bharata, and Shatrughna. By divine ordinance, a Kite snatched a fragment of that pudding and dropped it while flying over the forest where Anjana was engaged in worship. Vayu, the Hindu deity of the wind, delivered the falling pudding to the outstretched hands of Anjana, who consumed it. Hanuman was born to her as a result.

As a child, believing the Sun to be a ripe Mango, Hanuman pursued it in order to eat it. Rahu, a Vedic planet corresponding to an eclipse, was at that time seeking out the sun as well, and he clashed with Hanuman. Hanuman thrashed Rahu and went to take the sun in his mouth. Rahu approached Indra, king of devas, and complained that a monkey child stopped him from taking on Sun, preventing the scheduled eclipse. This enraged Indra, who responded by throwing the Vajra (thunderbolt) at Hanuman, which struck his jaw. He fell back down to the earth and became unconscious. A permanent mark was left on his chin, due to impact of Vajra, explaining his name. Upset over the attack, Hanuman’s father figure Vayu deva (the deity of air) went into seclusion, withdrawing air along with him. As living beings began to asphyxiate, Indra withdrew the effect of his thunderbolt. The devas then revived Hanuman and blessed him with multiple boons to appease Vayu.

It is traditionally claimed that Hanuman is present wherever the Ramayana is read:

Bow down to Hanumān, who is the slayer of demons, and who is present with head bowed and eyes full of flowing tears wherever the fame of Rāma is sung.

Some interesting facts about Hanuman:

He then applied sindoor all over his body for Rama’s long life. Seeing this innocence and unmatched devotion of Hanuman, Lord Rama gave him a vardan (blessings) that whenever the name of devotion takes place, Hanuman’s name will be taken first. Also, whoever will pay respect to Hanuman on Tuesday, not only will his/her wishes come true but will also be dear to Lord Rama himself. 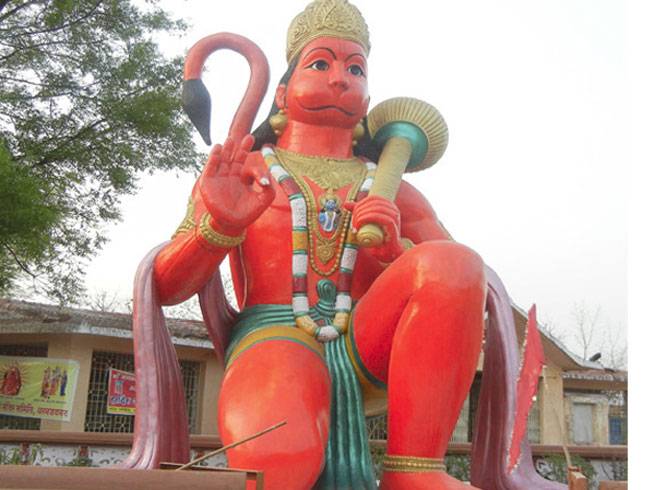 Some benefits of reciting Hanuman Chalisa –

One who will read the Hanuman Chalisa 100 times will be released from all material based sorrows (Kaam, Krodha, Lobh, Mad, Moh, Matsar) and will attend the great satisfaction of heavenly joy.