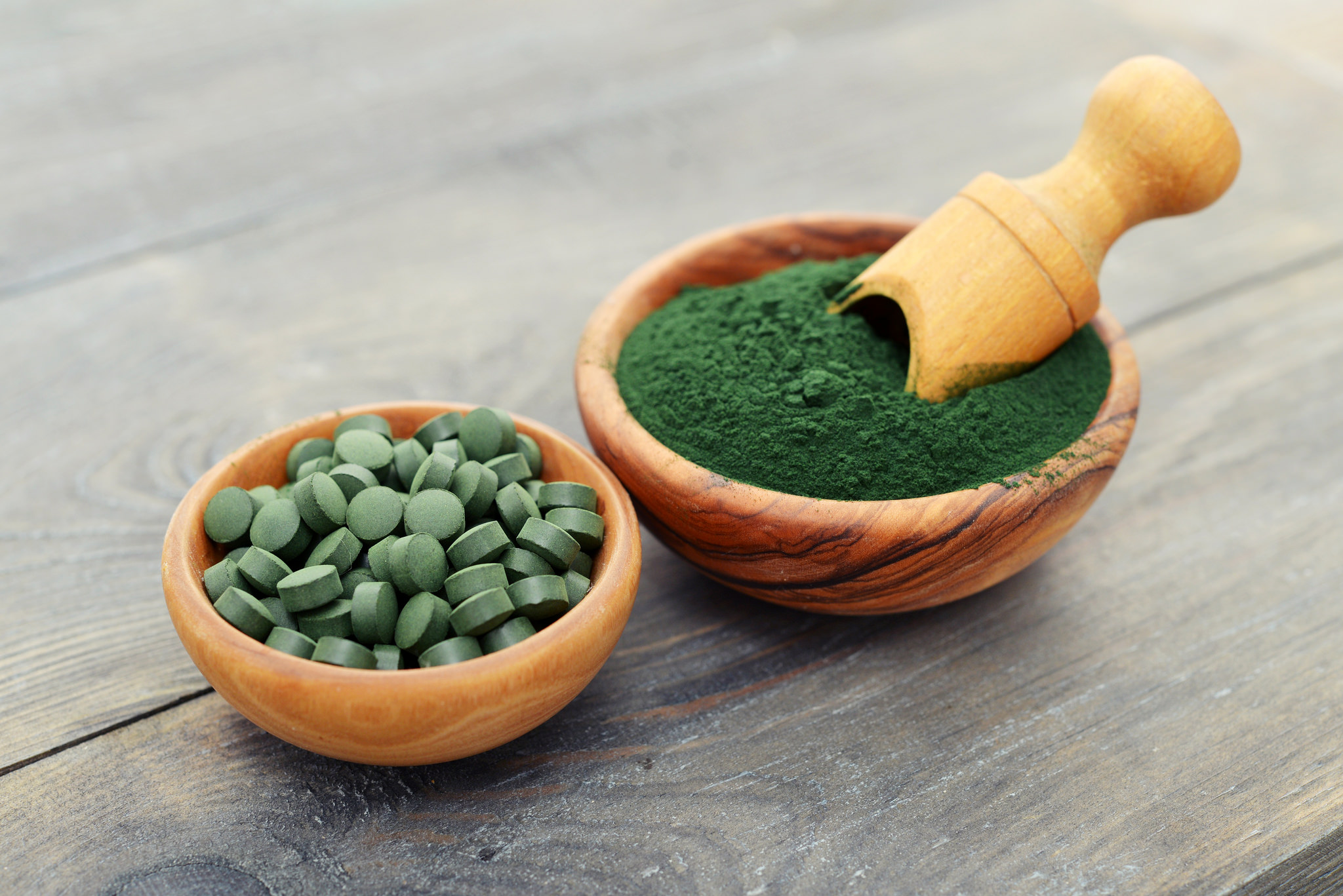 Spirulina is a natural “algae” (cyanbacteria) powder that is incredibly high in protein and a good source of antioxidants, B-vitamins and other nutrients. When harvested correctly from non-contaminated ponds and bodies of water, it is one of the most potent nutrient sources available.

It is largely made up of protein and essential amino acids, and is typically recommended to vegetarians due to its high natural iron content.

The high concentration of protein and iron also makes it ideal during pregnancy, after surgery, or anytime the immune system needs a boost.

While you may have only seen it as an ingredient in your green superfood beverages, energy bars and natural supplements, spiralina benefits are so amazing that taken on a daily basis they could restore and revitalize your health! To date, there are nearly 1,200 peer-reviewed scientific articles evaluating its health benefits.

Though it does taste like pond scum, Spirulina has some great health-boosting qualities:

Spirulina is a great source of other nutrients —  including (according to Wikipedia): “It contains vitamins B-1(thiamine), B-2 (riboflavin), B-3(nicotinamide), B-6 (pyridoxine), B-9 (folic acid), vitamin C, vitamin D, vitamin A and vitamin E. It is also a source of potassium, calcium, chromium, copper, iron, magnesium,  manganese, phosphorus,  selenium, sodium and zinc. Spirulina contains many pigments which may be beneficial and bioavailable”.

May Help Balance Blood Sugar – Studies show that spirulina may be especially helpful in balancing blood sugar, and may even be as effective as diabetes medication in some instances. Other studies show that it not only lowers blood sugar but may also lower HbA1c, which is a long term marker of blood sugar levels.

Powerful Antioxidants — Antioxidants are powerful substances that protect our cells from damage. Thanks to decades of research, many of us understand the importance of consuming enough antioxidants from natural sources, and spirulina is a great choice.  The antioxidant that makes spirulina unique is called phycocyanin, which is a potent inflammatory.

May help with those Allergies — Some research has suggested that Spirulina may be helpful for those with allergies and allergic reactions. This is likely because it reduces inflammation that leads to nasal congestion and other issues. In studies, those who took spirulina noticed a reduction in nasal congestion, itching, and sneezing.

Helps remove heavy metals — Spirulina can bind with heavy metals in the body and help remove them. It is also extremely high in Chlorophyll, which helps remove toxins from the blood and boost the immune system. In fact, one study found that 5gm of spirulina combined with zinc supplementation was enough to reduce arsenic toxicity by almost half!

Muscle and endurance benefits – Spirulina is known to increase fat burning during exercise. Its high antioxidant content makes it beneficial in reducing exercise induced oxidation which leads to muscle fatigue and inability to gain muscle.

Beneficial in Diabetes — In a study it was observed that taking Spirulina as a dietary supplement for 12 weeks results in a significant reduction in blood-fat levels. It is particularly beneficial for diabetics as it decreases inflammation and helps reduce blood pressure and cholesterol.

Aids in weight loss — Spirulina is rich in beta-carotene, chlorophyll, fatty-acid GLA and other nutrients which are particularly beneficial for overweight people. Taking this supplement is beneficial while fasting, as it supplies the nutrients that are needed to cleanse and heal your system, while curbing your appetite.

Prevents Cancer — Several studies have proven that Spirulina can arrest the development of cancer progression, reduce the risk of cancer initiation and boost your immune system.  It is a great substitute for animal products as it contains a special form of protein that assimilates well. Unlike animal proteins, it does not burden your body with waste products. It is also rich in phycocyanin, a pigment with anti-cancer properties. It strengthens immunity and inhibits excess cell division. Spirulina also offers some protection against oral cancers.

Improves Brain/cognitive functions — Folate and vitamin B-12 play an important role in the healthy functioning of the brain and nervous system. Being rich in these nutrients, Spirulina helps in protecting cognitive function as one starts to age. This nutritional supplement helps maintain brain function.

Cures Depression — Spirulina is a good source of folic acid which provides nourishment for the brain and supports the production of energy and blood cells. This makes it beneficial in the treatment of depression.

Eye Health — Research has shown that Spirulina is beneficial for the eyes. It is proven to be effective in treating eye diseases such as geriatric cataracts, diabetic retinal damage (retinitis), nephritic retinal damage and hardening of retinal blood vessels (angiosclerosis)

Treatment of Ulcers — Spirulina acts as a good treatment of gastric and duodenal ulcers, thanks to the presence of amino acids, cysteine and a high content of high quality protein. Being rich in chlorophyll, it is great for retaining and restoring a good digestion.

Treatment of Hepatitis and Cirrhosis — Clinical reports have indicated that Spirulina prevents, as well as cures, fatty liver and hepato-cirrhosis. This supplement should be taken for at least one month to notice beneficial results

Promotes Sexual Vitality — The high content of protein in Spirulina, as well as the presence of other vitamins, minerals and enzymes, makes it beneficial for improving sexual vigor.

Dental Health — Spirulina has a high content of phosphorus and helps improve your teeth.

Has anti bacterial properties — Chronic candida yeast is responsible for worsening symptoms of various autoimmune diseases. Spirulina keeps candida overgrowth under control by encouraging and supporting the growth of healthy bacteria in your stomach.

HIV and AIDS — Spirulina can cure the symptoms that are a side-effect of HIV and AIDS treatment. It also helps inactivate the human immunodeficiency virus associated with HIV and AIDS.

Beneficial during Pregnancy — Spirulina has a high content of iron which is required during pregnancy, particularly for those with anemia. It also prevents constipation.

Skin Toner –– Spirulina has a high content of vitamin A, vitamin B-12, vitamin E, calcium, iron and phosphorus, all of which are vital for your skin’s health. Free radicals make your skin look tired, limp and flabby. Taking Spirulina supplements on a regular basis works wonders for your skin, making it look toned, youthful and vital. It also treats flabby skin by eliminating the body’s metabolic waste products and strengthening the body as a whole.

Treatment of Dark Circles — Spirulina is effective in treating dark circles and dry eye symptoms. Its detoxifying effects give your eyes new energy and power, removing dark shadows and dryness.

Anti Ageing Benefits — Spirulina contains tyrosine, vitamin E or tocopherol, and selenium, all of which are known for their anti-ageing effects. Tyrosine slows down the ageing of skin cells. The antioxidants present in it eliminate free radicals which are responsible for skin ageing. Try this facial mask to prevent premature ageing of skin and fight acne. Make a paste by mixing some Spirulina with water and apply it on your face. Keep on for 20 minutes and wash off. This will make your skin amazingly soft and smooth as well as prevent signs of ageing like wrinkles.

Healthy Nails — Regular use of Spirulina treats fingernail ridges and other nail problems. Spirulina contains 70% high-value protein which is required by the body. Consuming it for about 4 weeks can cure nail problems and warts.

Promotes Hair Growth — External use of Spirulina can speed up hair growth. Besides consumption, this algae is used as an ingredient in shampoos and conditioning treatments. It also helps in hair re-growth.

Treatment of Hair Loss — Alopecia is an autoimmune disease characterized by hair loss at an alarming rate. It is not just confined to the scalp alone but also leads to hair loss across the body and face. This can result in bald spots, even in women, and even complete baldness. Spirulina acts as an alternative medicine to deter further loss of hair and facilitate hair renewal.

Treatment of Dandruff — Spirulina acts as an antioxidant compound and taking it for 4 weeks makes your hair completely dandruff-free, glossy and stronger.

The Side effects of Spirulina –

The key is not to exceed the recommended dosage. The human body is a group of intricate and delicate systems, which can be put in disarray with minimal intervention of harmful substances. And also remember to buy spirulina that is free from contaminants to avoid complications.