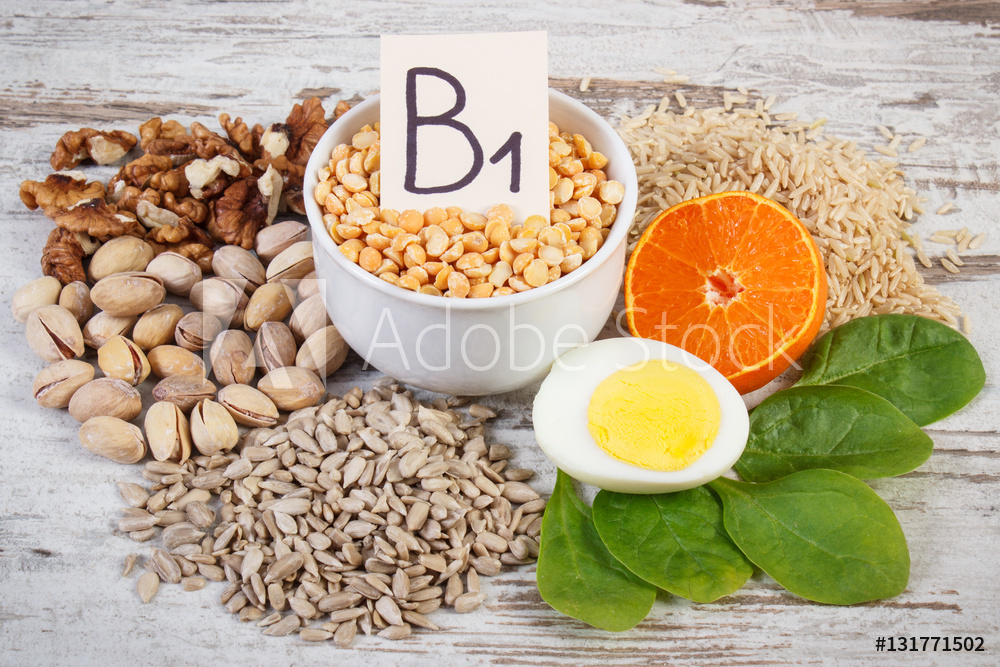 Vitamin B1 is formally known by other names such as thiamin and thiamine. Thiamin is a contraction of thio-vitamin, meaning a “sulfur-containing vitamin.” It was originally named aneurin and later classified as the first vitamin in the B group.

Vitamin B1 is one of the eight water-soluble vitamins in the B complex family. It helps in the conversion of carbohydrates into glucose, which in turn is used to produce energy for carrying out various bodily functions. Vitamin B1 is also required for the breakdown of fats and protein.

In addition to these health benefits, it maintain the muscle tone along the walls of the digestive tract and promotes the health of the nervous system, skin, hair, eyes, mouth, and liver. It also improves the body’s ability to withstand stress and is often called the “anti-stress” vitamin.

The Benefits of Filling the needs of Vitamin B1 appropriately are —

Vitamin B1 Deficiency Symptoms —
Some of the early symptoms of deficiency might include lethargy, irritability, loss of memory, loss of sleep or appetite, weight loss, indigestion or constipation, and calf muscle tenderness. If left untreated these initial symptoms might lead to a more severe form of thiamin deficiency, known as beriberi. This condition is characterized by nerve, heart, and brain abnormalities, but the symptoms might vary in every person and depends on a number of factors. Some more examples are explained below:

Dry Beriberi — This condition might involve nerve and muscle abnormalities, a prickling sensation in the toes, a burning sensation in the feet at night, leg cramps and muscle atrophy.
Wet Beriberi — Common symptoms might include abnormally fast heart beat, fluid retention in the legs, pulmonary edema, and hypotension, which might result in shock and even death.
Brain Abnormalities — In alcoholics, thiamin deficiency might result in brain abnormalities such as Wernicke-Korsakoff syndrome. Some of its common symptoms include haziness, involuntary eye movements, difficulty in walking and partial paralysis of the eyes among other debilitating symptoms. If ignored, these symptoms could become fatal. Some of the common symptoms of Korsakoff’s psychosis include loss of memory, incoherence and confabulation.
Infantile Beriberi — This variety is commonly seen in newborn children of women already suffering from thiamin deficiency who contract this condition from the mother’s milk. Heart failure, loss of reflexes and aphonia are some of the common symptoms, so be sure to have sufficient levels of vitamin B1 if you are pregnant.

Sources of Vitamin B1 –-
Vitamin B1 is contained in foods and supplements. The food that we consume daily, usually contain vitamins B1, although its quantity may vary. Broadly speaking, a source of vitamin B1 consists of legumes, vegetables, especially green vegetables, fruits, and meats.

So, consume vitamins, including vitamin B1 appropriately and in accordance with the doctor’s advice. If the vitamin deficiency or excessive is not good, because it can cause various health problems. once again, the body is unique.